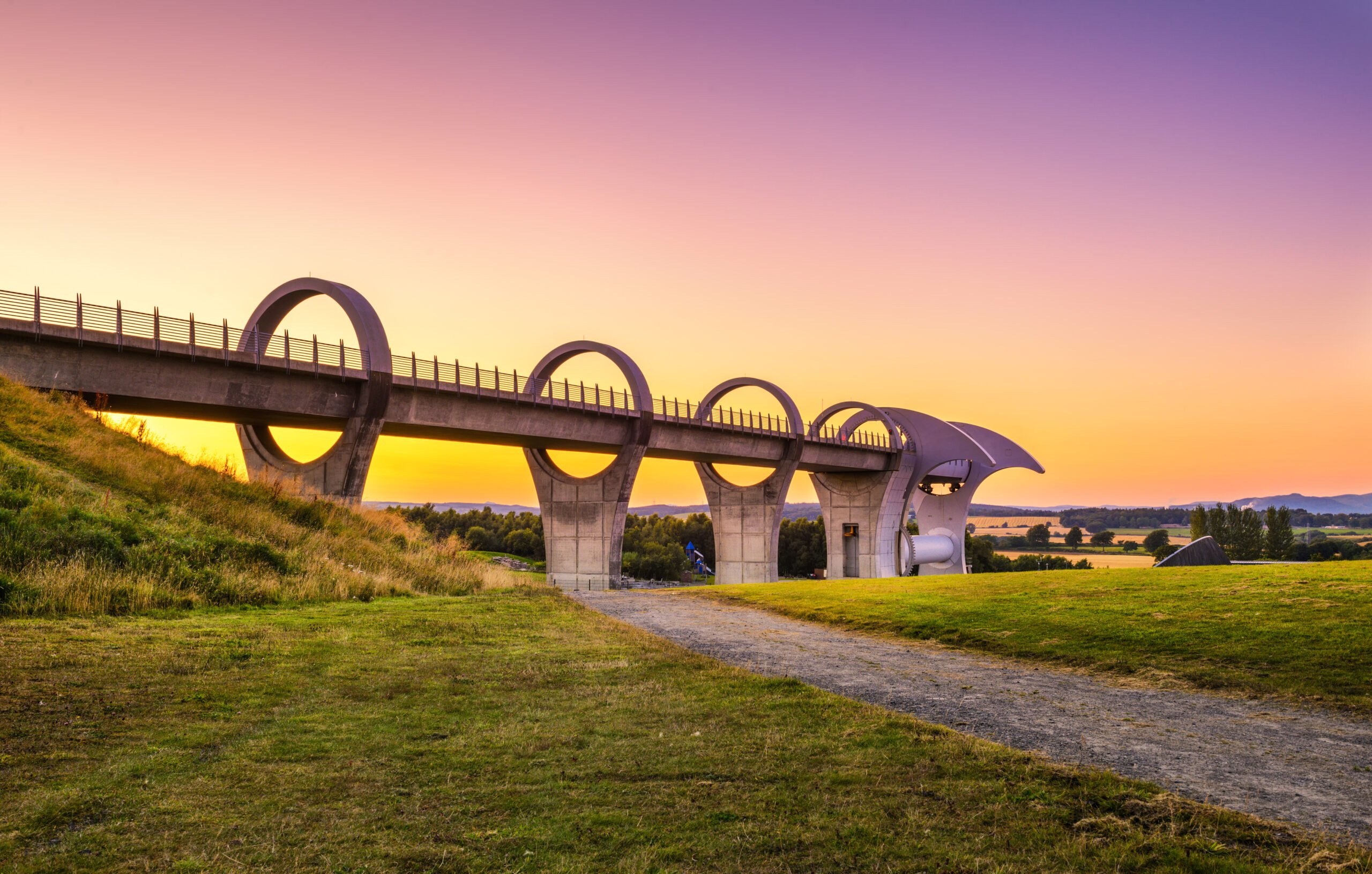 Standout Lifts from Around the World

At Cibes Lift UK, we’re fascinated about anything to do with lifts! Despite being incredibly functional items that can be used in homes, businesses and public places, they can also make incredible architectural features. In fact, some lifts around the world are so outstanding that they’re often considered as a tourist attraction.

Our aim at Cibes Lift UK is to show you that lifts don’t just have to be practical facilities that take you from floor to floor. These days, there’s no need for lifts to be tight, awkward or constricting. Modern adaptations to architecture now mean that lifts are light and airy, helping passengers to feel less enclosed.

Records show that the first lift was built in ancient Rome, going as far back as 336 B.C. However, passenger lifts were created in the 18th century. In the 1800s, technology started to advance which meant that lifts no longer had to be worked manually. 1823 saw Burton and Hormer, two British architects, build a lift that was powered by steam. Their design was developed by several others over many years until Elisha Otis solved a huge safety problem that had never been fixed before. He is known as the inventor of the modern lift and went on to found his own company, which installed the first public lift in a New York building in 1874. Since then though, it’s safe to say that lifts have changed dramatically in the way that they look. Let’s take a look at some of the most eye-catching lifts from around the world. 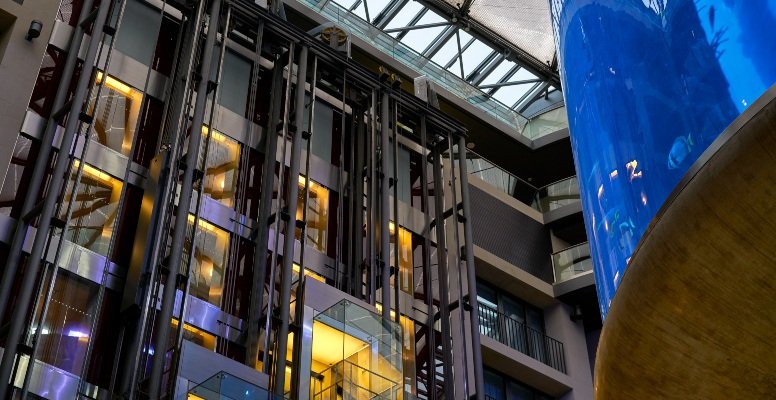 Germany is a country known for its stunning pieces of architecture. However, most people’s minds tend to wander to the likes of the Cologne Cathedral, Neuschwanstein Castle, Hohenzollern Castle or Stadtbibliothek Stuttgart. Found inside the lobby of the Radisson Blu Hotel in Berlin, the AquaDom is a transparent lift that first opened its doors in 2004. What makes it so unusual? This impressive cylindrical structure is the largest freestanding aquarium in the world, standing at 25 meters tall. It holds 260,000 gallons of water and is said to be home to more than 1,500 fish. So while you travel up and down the varying levels in the hotel, you basically get a free trip to the Sea Life Centre too. 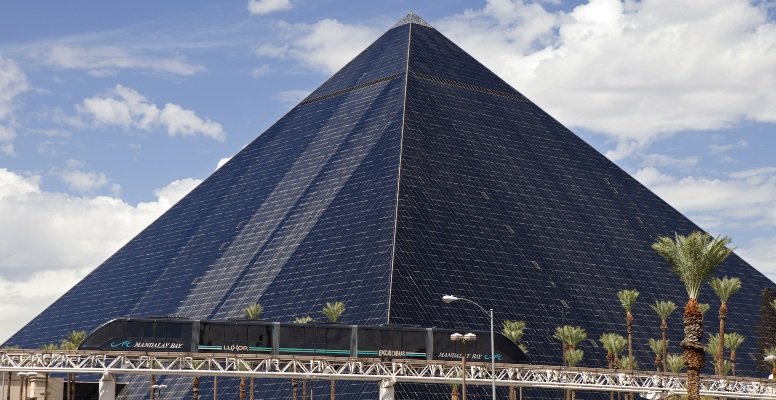 Las Vegas, a place known for its bright lights and party lifestyle. True to tradition, Luxor’s Inclinators stand out from any other kind of lift or elevator. They are designed to transport hotel guests up and down the iconic building at a 39° angle. Although there’s a lack of transparent observation windows, there are great views to be witnessed below once you reach the top. 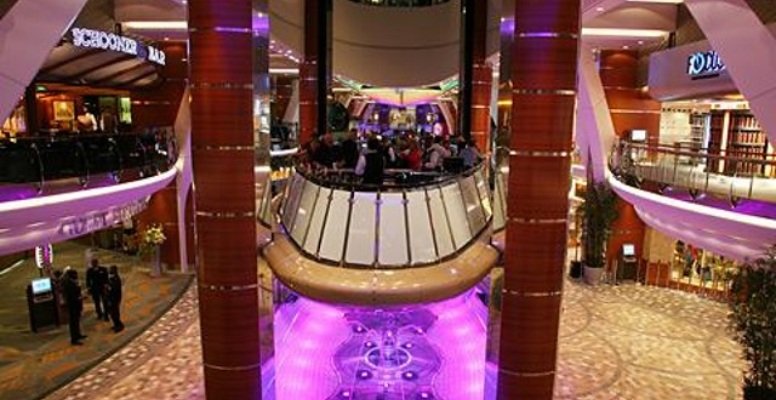 Now, this one’s something a little bit different. We normally think of lifts being inside a property, not a ship. The Rising Tide Bar can be found on all Royal Caribbean Oasis Class ships and is another aquarium-inspired lift. It travels slowly from the Royal Promenade deck to the Central Park deck, giving guests a chance to enjoy their surroundings. The unique thing about this lift is that there’s a bar on board, which is open throughout the day. This does mean, however, there’s an age restriction when it comes to using this lift. 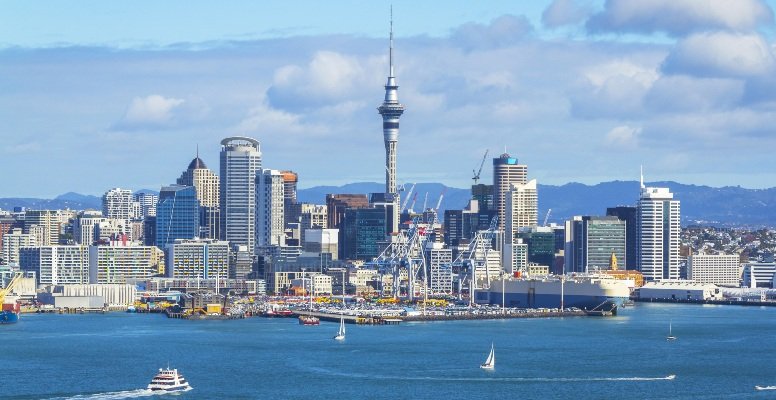 At the telecommunications/observation tower in Auckland, there’s plenty to see. In total, it has four lifts, with one of them taking you all the way to the very top of the 196-meter building. 40 seconds is all it takes to travel up to the observation level. The thrill of this journey is that not only is the front transparent, but the floor is too! The glass flooring allows you to look beneath you as you travel up the tower.

We just had to mention one that was in the UK didn’t we? The Falkirk Wheel is a magnificent engineering piece that’s found in Scotland. This rotating boat lift – the only one of its kind in the whole world – connects the Forth and Clyde Canal with the Union Canal. Since opening in 2002, it attracts more than 500,000 visitors a year. Its height is said to be the same as eight double-decker buses all stacked on top of each other. 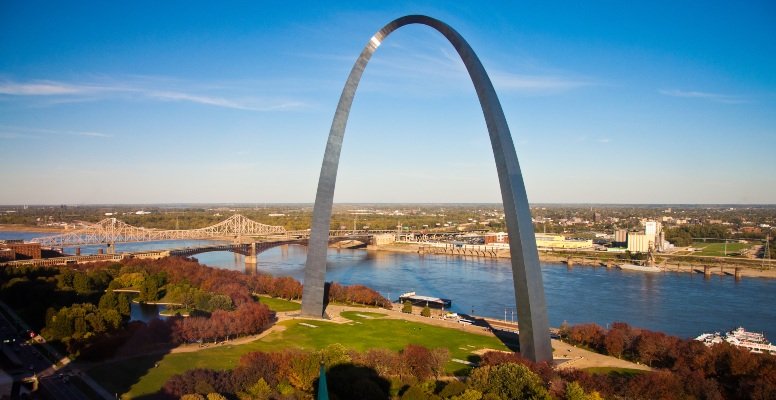 Want to get to the top of America’s tallest monument? Well, thanks to one of the most futuristic looking lifts in our list, you can do just that. The pod elevator of the Gateway Arch was a stroke of genius crafted by Eero Saarinen, a Finnish architect. With glass doors, you’re able to look inside the mechanical structure of the Arch’s interior. After the 4-minute journey to the top, you’re able to look down and take in the sights below you, including the Mississippi River. 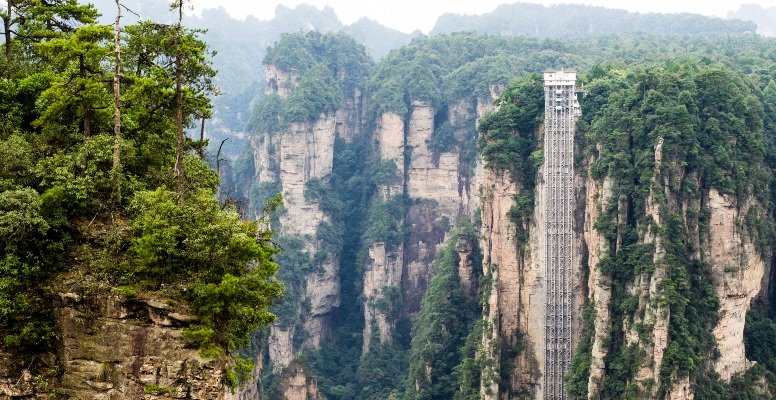 The Bailong Elevator is thought to be the tallest outdoor lift in the world. It’s built into the side of a cliff in the Wilingyaun area and stands at 326m high. The lift can scale the side of the cliff in around 90 seconds, carrying 50 people safely up the side. As you travel up, you’re offered some of the most spectacular mountain views of the Zhangjiajie National Forest Park. 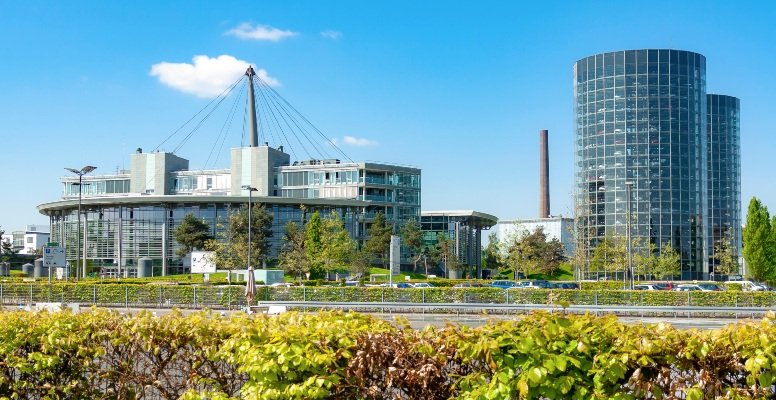 Sitting adjacent to the Volkswagen factory in Wolfsburg is the Autostadt, a popular visitor attraction. It brings in more than 2 million visitors a year, and it’s easy to see why. Autostadt, meaning “car city” is a place that includes a hotel, restaurants, a museum and many other attractions. It features two of the iconic car silos that make this an awesome lift system. 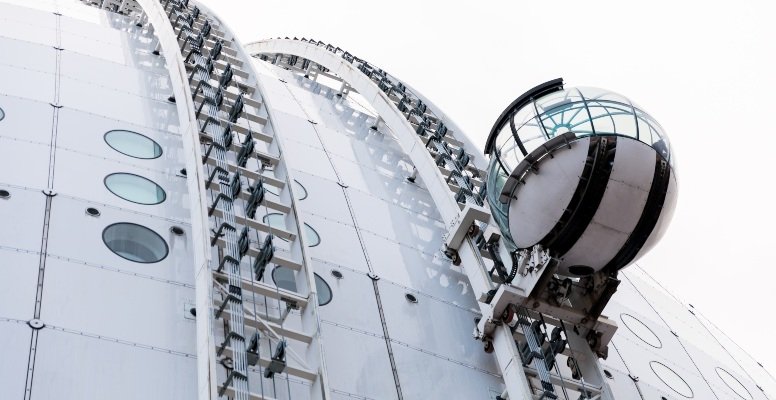 Shaped like a large white ball, the Ericsson Globe is the largest hemispherical building in the world. Originally known as Stockholm Globe Arena and commonly referred to in Swedish simply as Globen, this indoor arena is 85m high and has a diameter of 110 meters. On the outside of the building, you’ll see the Skyview gondolas which offer a 20-minute trip alongside the curvature of the building. 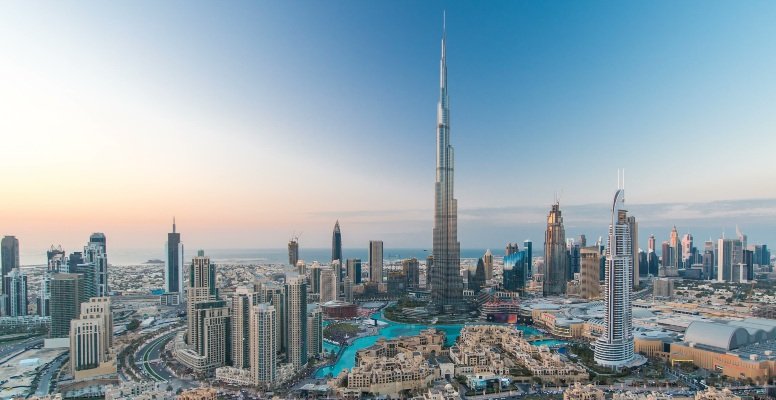 The Burj Khalifa is the world’s tallest building and is home to the fastest double-decker lifts known to man. People can travel between any floor within the building on one of the lifts, reaching the observation decks on floors 124 and 125 in just 60 seconds. The building contains 57 elevators, but it’s the double-decker ones you want to look out for! 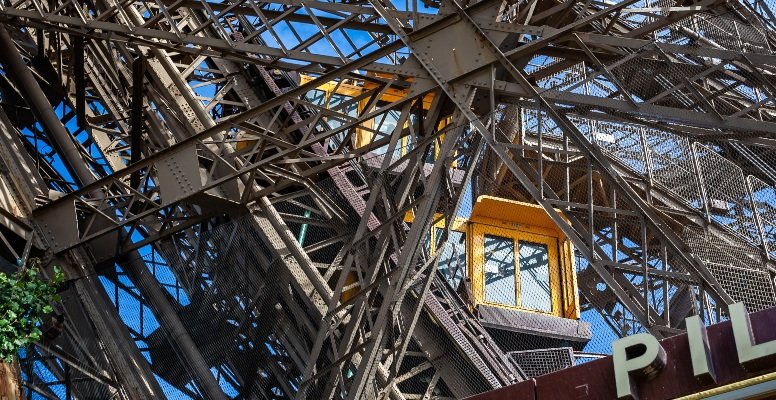 Believe it or not, but there are still two of the original lifts that were opened in 1889 in use on the Eifel Tower. Yes, we know they’ve been renovated, but this is still incredibly impressive. Research suggests that when combined, the distance that these two lifts travel a year is equal to that of two and a half trips around the world. The lifts take you to the top of the Eifel Tower, with it being said that people have waited up to 3 hours in a queue to experience the journey. Of course, if you can’t wait this long, you can climb 674 stairs to reach the second floor. 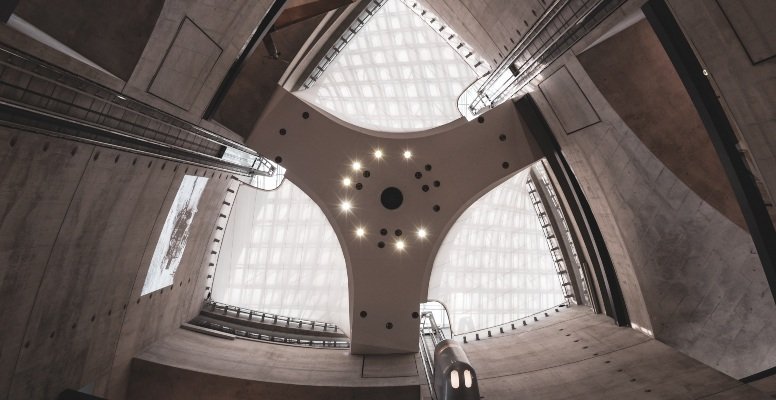 We did say that Germany is a place known for its architecture, so there’s no wonder this is the third German lift on our list. When you look at the lifts in the Mercedes-Benz Museum in Stuttgart, you automatically think that you’re in some sort of sci-fi film. They’re sleek and retro, with completely unique styling. You can reach the museum’s top floor from the ground level in around 30 seconds. So not only are these lifts futuristic, but they’re also fast 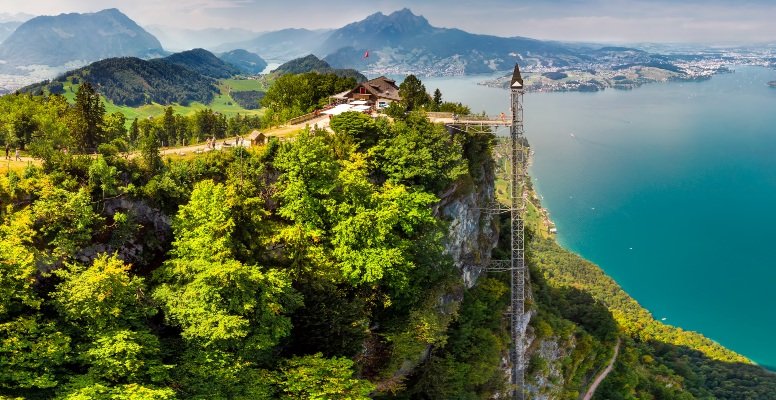 Have we saved the best until last? The Hammetschwand Lift is one of the most picturesque things we’ve ever seen. It’s the highest outside lift in Europe, standing at an impressive 153m high, which is roughly half of the Bailong Elevator in China. It’s tucked into the side of a mountain and is ideally placed for those who love hiking. Why not ride the lift to the top and then enjoy a nice walk along one of the many trails back down to Bürgenstock, which is where the base of the lift is found.